As a writer, producer, and actor, Tom Arnold has established himself to both television and film audiences worldwide, having won such awards as the Peabody Award and a Golden Globe Award.  Additionally, he helped put Fox Sports Network on the map with his hosting duties on “BEST DAMN SPORTS SHOW PERIOD.” Arnold currently hosts CMT’s “MY BIG REDNECK WEDDING” and “MY BIG REDNECK VACATION” which premiered at the highest ratings in CMT history.

Arnold has successfully broken out of the comedic stereotype and is becoming a fixture at film festivals by landing more mature and dramatic roles.  He received critical praise for his role in “GARDENS OF THE NIGHT,” opposite John Malkovich, “THE GREAT BUCK HOWARD” starring John Malkovich and Tom Hanks, “GOOD DICK” opposite Jason Ritter, and “THE YEAR OF GETTING TO KNOW US” opposite Sharon Stone, Jimmy Fallon and Lucy Liu.  In 2005, he received critical notice for his role in Don Roos’ “HAPPY ENDINGS” for Lions Gate Films. He was also seen in “PRIDE” opposite Terrance Howard, and “ANIMAL FACTORY,” directed by Steve Buscemi.  Other film credits include “SOUL PLANE,” “CRADLE TO THE GRAVE,” “EXIT WOUNDS” and “THE KID & I.” 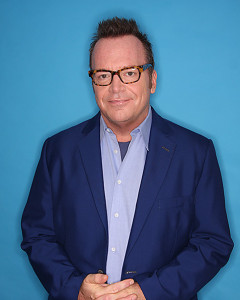 Arnold began his career in comedy at the University of Iowa before moving to Minneapolis, where he won the Minneapolis Comedy Competition in 1988.  He then moved to Los Angeles to write on the highly successful television series, “ROSEANNE,” before eventually serving as executive producer for the sitcom.  He went on to star in his own HBO special entitled “TOM ARNOLD: THE NAKED TRUTH,” and then wrote, produced and starred in his own television series “THE JACKIE THOMAS SHOW,” “TOM” and “THE TOM SHOW.”

Born in Iowa, Tom has established a writing scholarship and runs an acting workshop for students at the Indian Hills Community College in Iowa.  Tom is heavily involved in many charities such as The Race to Erase MS, the Elizabeth Glaser Pediatric AIDS Foundation, Best Buddies, Camp del Corazon, The Kayne Eras Center, Promises Foundation, Carousel of Hope, Arnold’s Inner City Games, The Hollenbeck Christmas Giveaway, the Leukemia and Lymphoma Society, Special Olympics, the USO and GLAAD for which he won the Vanguard Award.

Tom Arnold recently returned to his roots as a stand-up comic.  Never scripted, Tom pokes fun at his Midwest past, marital follies and absurd Hollywood stories.  Just like his past film and television comedy work, Tom is a ball of chaos and charisma on stage.  Showtime premiered his first stand-up comedy special on New Year’s Eve, and he frequently hosts the popular “Laughing with the Stars” weekly comedy show at The Laugh Factory in West Hollywood featuring supporting acts ranging from rising young comics to all-time favorites.  His shows are famous for their loose atmosphere with Tom breaking down the walls between his fellow comics and the audience.  No one is quite sure what to expect any given night.